An official of his agency Storm S Company said “advertisers seems to look at the new gentle and romantic look in the drama” and “start coffee ad shoot first. as soon as contract tuning is over, the other brand advertisements gradually digested.”

‘Coffee Bene’ is a franchise businesses booming in Korea. As a purely local franchise brand, Caffe Bene serves special blend coffee, Belgian waffles and Italian gelato. Its menu might not seem that different from Starbucks, Coffee Bean, Angel-in-Us and Holly’s, but it has appealed to many customers because of its lower prices, comfortable atmosphere and the fact that it donates a portion of its profits to charity.

Caffe Bene’s growth has been attributed to the use of Korean celebrities to promote the brand. “The growth has been so fast. Their rapid growth also has something to do with ‘Star Marketing’. They use popular stars to promote the cafe. Star marketing is always effective in Korea,” said of Jun Hyung-joon Coffee Bene’s franchising consultant. 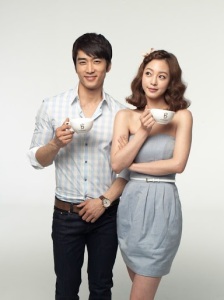